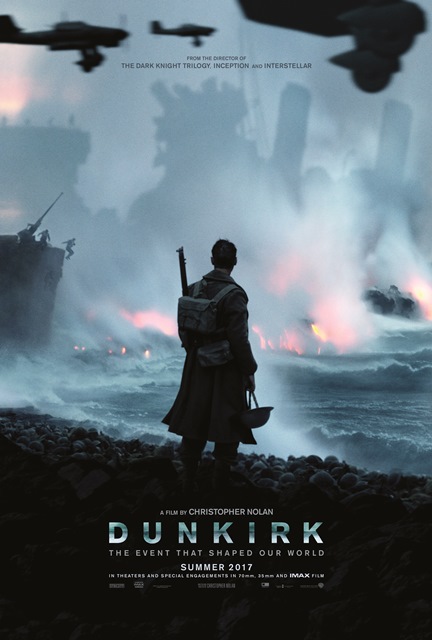 When your back’s against the wall, and the enemy’s closing in fast, and all hope appears lost, it might be a good time to consider praying.

That’s what faced England in May 1940.  In early World War 2, Hitler’s war machine had roared through France, pinning about 400,000 Allied troops on the beaches at Dunkirk, by the English Channel.  German Panzer tanks were advancing quickly.  Surrender or annihilation seemed imminent.

Against huge odds, the Brits mounted a sea evacuation.  From May 26 to June 4, a drama unfolded that inspired millions and significantly influenced the war’s outcome.  Warner Bros.’ Dunkirk brings this epic story to the big screen.

The film focuses on land (infantry on the beach), sea (navy and civilian evacuation efforts), and air (plane combat).

Initial prospects looked bleak.  British General Alan Brooke said, “Nothing but a miracle can save the BEF [British Expeditionary Force] now.”  New Prime Minister Winston Churchill (he took office May 10) had predicted that 30,000 could be evacuated successfully.  In the end, 338,000 troops crossed the Channel.  What happened?

A fortuitous – some would say providential – combination of courage, civilian involvement, German errors, and weather intervened.  It’s been called the “Miracle of Dunkirk.”

Across the Channel, British civilians mobilized their motorboats, yachts and lifeboats to help the Royal Navy bring troops to safety.

King George (the current Queen Elizabeth’s father) called for a national day of prayer.  Millions across England entered churches on May 26 to pray for success.

Starting May 27, a flotilla of naval and civilian vessels – “The Little Ships,” sailed by both naval and civilian personnel – crossed the Channel in “Operation Dynamo.”  The Luftwaffe attacked the boats and the Allies on Dunkirk beaches.

Historian Alan Axelrod notes, “Fortunately for the Allies, the notoriously treacherous English Channel was calm [facilitating The Little Ships’ crossing], yet the weather was overcast, greatly limiting the Luftwaffe’s ability to launch attacks.”

Weather coincidences?  Hmmm.  After the evacuation, British churches sang biblical Psalm 124:  “Praise the Lord, who did not let their teeth tear us apart!  We escaped like a bird from a hunter’s trap.  The trap is broken, and we are free!  Our help is from the Lord, who made heaven and earth.”

As with any war, not everything went well.  Around 3,500 British perished; about 60,000 French became POWs.  At first, Brits concealed evacuation plans from the French and Belgians, counting on them to continue combat.  Nevertheless, French, Belgians and Poles composed 140,000 of the 338,000 evacuees.

That spirit plus the successful evacuation helped motivate a somewhat reticent US to support the British war effort.  (Pearl Harbor was still eighteen months future.)

“We shall fight on the beaches….”

Director Nolan has described Dunkirk as “an essential … decisive moment” in WW2:  “If this evacuation had not been a success, Great Britain would have been obliged to capitulate.  And the whole world would have been lost, or would have known a different fate: the Germans would undoubtedly have conquered Europe, the US would not have returned to war.  It is a true point of rupture in war and in [the] history of the world.”

Dunkirk – both the film and the entire story – can inspire today’s generation to persist in opposing evil despite overwhelming odds.  The film omits the national prayer element, but the film website includes it.  Knowing the whole story especially made me want to stand up and cheer as I watched.

Rated PG-13 (USA) “for intense war experience and some language.”

Rusty Wright is an author and lecturer who has spoken on six continents.  He holds Bachelor of Science (psychology) and Master of Theology degrees from Duke and Oxford universities, respectively. www.RustyWright.com